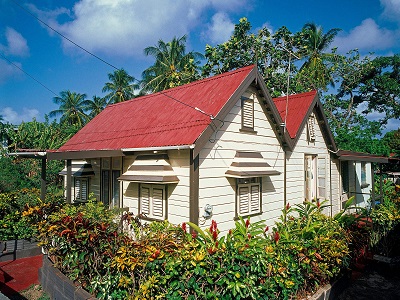 A quick search for the word chattel shows a definition of "movable personal property", similarly the chattel house (dating back to the islands plantation era) is a moveable wooden house. After the abolition of slavery, not having any land of their own, the former slaves were allowed to construct homes on the plantation as a part of a tenantry system. But the working class would build small wooden houses, set on blocks and designed to move from location to location, because as former slaves, if any challenges occurred with the plantation owner, the home could be quickly dismantled packed onto a donkey or ox cart and rebuilt elsewhere in a single day.

Chattel houses still exist in our modern culture and though they still move at times they are designed to be a stronger more permanent fixture of the islands landscape. These homes are designed to take a wall or wooden extension to the back or side and as such are constructed in stages as money becomes available, starting as a single roof structure then expanding into several other rooms This can cause some homes to have a very fragmented appearance as it relates to styles, patterns or roof.

Chattel houses are also popular in Trinidad and other Caribbean Cultures though they occur less frequently as these houses may be more susceptible to hurricanes in other islands that are within the hurricane belt.