Parish Churches (to be edited)

The first St. Lucy Parish Church is one of the six original parish churches. It has been rebuilt three times, with its present structure having been constructed in 1837. Previous structures were damaged by hurricanes in the years 1629, 1780 and 1831. Its architecture is predominately Gregorian. 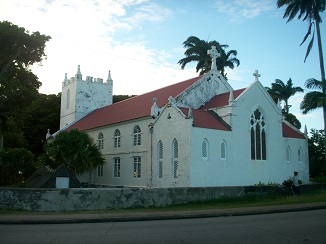 One of its Gregorian features is bell tower, situated at the entrance. It was first constructed of timber in 1629.

Constructed in 1784, this Anglican Church is the oldest ecclesiastical structure on the island. The imposing Georgian and Gothic architecture are two of its most fascinating features. Another attraction is Rise to Power, a painting of the Resurrection, by American artist Benjamin West. The painting carries a peculiar and interesting story. Before it was displayed inside the church, it was stored in an outbuilding on a nearby plantation. A thief, who sought to evade lawmen by hiding in the same building, was so uneasy with Jesus' gaze that he punched the eye out of the painting. The painting still bears the scars from the vandalism.

This historical church was built in 1836, replacing the previous wooden structure after it was destroyed by the Great 1831 Barbados Hurricane. It is said to be the most English of all the Barbadian churches because of its classic Gothic architectural design. Another interesting feature of this Church is its elaborately carved pulpit which is said to contain six different woods: ebony, locust, Barbados mahogany, manchineel, oak and pine - the first four of which are indigenous to Barbados.

This church is located on the edge of Hackletonâs cliff in picturesque St. John, overlooking the East Coast of Barbados with church grounds that are lush and serene. A notable feature of the church is that in its churchyard lies  Ferninando Paleologus, a descendant of Emperor Constantine the Great, and who was the Parish Warden. Ferdinando died here in Barbados in 1678, after being a resident for over 20 years. The Church is also the final resting place of Thomas Hughes, who was buried directly behind Ferninando in a standing position. This unorthodox position was requested by Hughes since he really sat at the job he held.

This Anglican Church is one of the four oldest in Barbados. The wooden structure was built in 1628 by the first settlers to Barbados. The St. James Parish Church was later replaced with a coral and limestone structure after it was damaged by a hurricane in 1675.

One of this church's unique features is its original bell- the oldest in Barbados. After being damaged, by a fall in 1881, the bell, which no longer is in operation, was sent to England for repairs. An interesting fact is that the bell, which carries the inscription 'God bless King William-1696', predates the American Liberty Bell by 56 years.  Over the course of the years in the 1980s and 90s, there has been considerable work done in the restoration of the building.