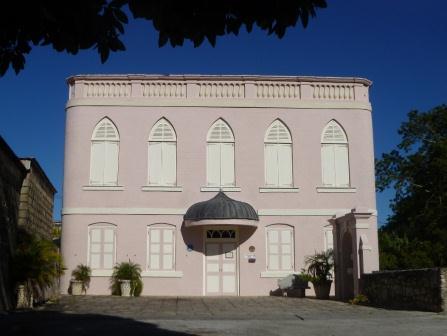 one synagogue in Barbados - The Nidhe Israel Synagogue.

The synagogue was built in 1654 but destroyed by hurricanes in 1831. It was rebuilt but after falling into disrepair, it was sold in 1929. Some 54 years later, the building was restored for use by the Jewish community. It is now an active synagogue and a protected building of the Barbados National Trust. The synagogue is located next to the Nidhe Israel Museum, which highlights Jewish history in Barbados. The synagogue, as well as the museum, makes up a part of the World UNESCO Heritage Site - Historic Bridgetown and Its Garrison.

The Reconstruction
After the sale in 1929, numerous changes were made to the building and its surroundings. The once woman's gallery looking down onto the altar, was made into a full second floor, the arches and floors had been replaced and worse yet, the cemetery had been made into a dumping site.

The property was seized by the Barbados Government in 1983, with the intentions of erecting a courthouse, but thanks to the efforts of the local Jewish community, the building was turned over to the Barbados National Trust. The renovation process began in 1986 and is again an active synagogue.

While excavating the rabbi's house in 2008, American archaeologist, Michael Stoner, uncovered a Mikvah dating the 17th century. This is the only one known to be in existence in the Western Hemisphere. The Nidhe Israel Museum was also opened in 2008 and can be toured Monday to Sayurday from 9am to 4pm.