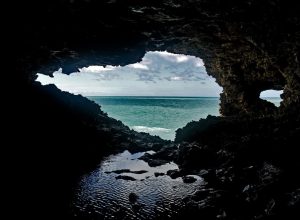 This beautiful sea cave is located under the cliffs at North Point, St. Lucy. This is the most northerly of the island. The cave's coral floor is estimated to be 400000 to 500000 years old and the 'younger' coral section above the floor is about 126000 years old. But this is not the main feature of this cave. Animal Flower Cave is home to sea anemones, or 'animal flowers'. The flower consists of tentacles that can sting and paralyze a passing fish in the larger variety of species. The tentacles retract into the stalk or stump for safety on contact with an alien object like a stick. The flower then waits a while before coming out of the stalk again to allow danger to pass. Depending on sea activity, visitors can relax in the beautifully calm pool located in this cave, and even look out of the cave 'window'.

Admission: Adults $10US; Children $5US 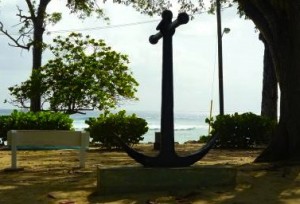 Barbados' West Coast offers magnificent views of the Caribbean Sea. Folkestone Marine Reserve is a protected area, under the protection of the National Conservation Commission. It is well known for its artificial reef which was created by the deliberate sinking of the ship Stavronikita. This reef is located less than half of a mile from the shore, and is 120ft deep. These deep crystal clear waters of the Caribbean Sea makes this is an excellent spot for experienced scuba divers to explore. It should be noted that scuba divers should always explore the deep in the company of others. The reef provides shelter for many forms of marine life, including sea anemones, lilies, fans and sponges.

Folkestone also has an inshore reef found in the Recreational Zone of the Reserve. This area is mostly utilized by snorkelers. Folkestone Marine Reserve houses a Museum which provides information and photographs on coastal marine life; it also features an aquarium with rare and fascinating sea creatures. Tennis and basketball courts, a picnic area, and a childrenâs playground are also a part of the Reserve.

To facilitate the different activities around the coral reefs, Folkestone is divided into four zones: 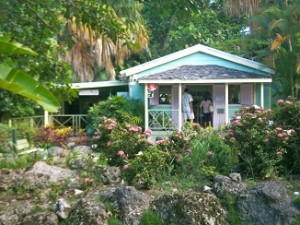 Andromeda Botanic Gardens is an amazing, Barbados National Trust garden with an unparalleled collection of plants, situated on the east coast. Created by multi-award winning Iris Bannochie, it is the only botanic garden in Barbados with historical and cultural significance. ‘One of the most special gardens in the world’.

Andromeda Gardens was established by the renowned Iris Bannochie as a private family garden. Ms Bannochie was the most influential gardener from the region and her accolades include three gold medals at the RHS Chelsea Flower Show; the RHS Veitch medal; and the Silver Crown of Merit awarded by the Barbadian government.

Previously farmland, Mrs Bannochie created this unique garden with many trees, palms and other plants collected from her travels across the globe. The variety of plants in this historic garden is unparalleled and simply wonderful – a true horticultural delight. She bequeathed Andromeda Botanic Gardens to the Barbados National Trust in 1988.

Admission: Adults $12.50US; Children HALF PRICE

Two little-known uninhabited islands off the coast of Barbados and the only two islands belonging to the island. Today there remains only one of these small islands- Culpepper Island.

Pelican Island, aptly named after the Brown Pelicans who used this small island as a nesting ground, was once off the west coast of Bridgetown and Fontabelle in St. Michael. It was said that during low tide it was possible to wade over to the island, and in the event of high tide, jetties were taken. A quarantine facility was housed on this island specifically for sick crew and passengers from ships, so as to contain communicable / infectious diseases and prevent them from spreading to the mainland. Between 1956 and 1961, the Caribbean Sea between Pelican Island and Barbados was reclaimed and filled in during the time of the construction of the Barbados Port. Pelican Village, a tourist attraction by the Port featuring unique Barbadian arts and craft, was named as a tribute to this lost island.

The remaining island, Culpepper, is located a little over 250 ft off Barbados on the eastern coastline. It is in the Atlantic Ocean, and it is possible to wade over to this island in low tide. Swimmers are cautioned to be careful as the current here can be very strong. Named after the Culpepper family who once owned this piece of land in the 18th century, this little island is also very close to another tourist attraction and heritage spot- Ragged Point Lighthouse. There is also a claim by members of the region's indigenous Lokono-Arawak and Karifuna-Carib tribes in March 2006 stating that Culpepper Island belongs to them. They were descendants of Princess Marian, daughter of the last Hereditary Lokono Arawak Chief AmorotaheHaubariria (Flying Harpy Eagle) of the Eagle Clan, and the Karifuna-Carib ambassadors from the island of Dominica. Culpepper Island is 220 ft x 75 ft and rises approximately 20 ft out of the water.