The Barbados national flag was designed by Grantley W. Prescod. It is divided into three equal vertical panels. The two outer panels are untramarine, while the centre is gold. A black broken trident rests in the centre of the flag. The broken trident signifies Barbados' break away from Britian, while the ultramarine and gold represent the sky sea and sand, of which this island is so fondly known.

Things to remember regarding the National Flag:

I pledge allegiance to my country Barbados and to my flag,
To uphold and defend their honour,
And by my living do credit
To my nation where ever I go.

The National Anthem
Lyrics by Irving Burgie
Composed by C. Van Roland EdwardsIn plenty and in time of need
When this fair land was young
Our brave forefathers sowed the seed
From which our pride is sprung
A pride that makes no wanton boast
Of what it has withstood
That binds our hearts from coast to coast
The pride of nationhood

The Lord has been the people's guide
For past three hundred years
With him still on the people's side
We have no doubts or fears
Upward and onward we shall go
Inspired, exulting, free
And greater will our nation grow
In strength and unity

The Motto
Pride and Industry

The Coat of Arms

The National Flower of Barbados 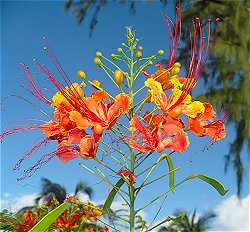 Dwarf Poinciana or Flower Fence, but commonly known as the Pride of Barbados flower, is Barbados' national flower. This flower blooms year round and while it comes in a variety of colours, the red with yellow petals is considered to be the national flower. Other colours common in Barbados are yellow, orange and pink.