Community Theatre Productions first developed Laff-it-Off in September 1985 as a result of the need to “promote popular theatre in Barbados”. The company produced the popular show for & years from 1985 to 1992. Today now in its 28th year the show is owned by Laff-it-Off Productions Inc, directed by Cecily Spencer-Cross and produced and Managed by Ian Estwick (also the Director of the company)

Laff-it-Off, which was originally offered from December to March is now typically presented in the months of January to March. The show takes a satirical look at local and regional scenarios, politics and social interests and its flexible production design allows for the inclusion of  “improv” sketches of late breaking activities and news from the region.

The production is also often exported to other aisles such as St. Lucia, Trinidad & Tobago, New York, Boston, Toronto and London.

This years installment is called "Out to De Baller"

Laff It Off 2014 presented yet another halarious bout of skits. That year's production was entitled "Ya Got To Pay" and was presented at the Ann Jordan Auditorium at St. Gabriel's School.

COME CLEAN was the 2013 installment of the popular production. 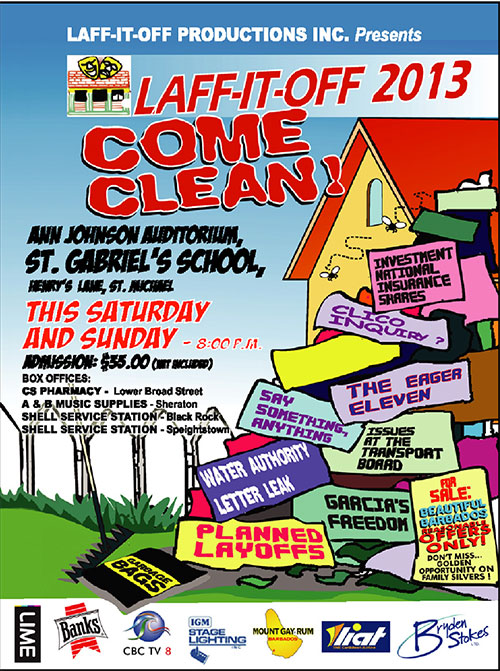