Kensington Oval lies on the outskirts of Bridgetown. It is predominantly a sporting, and more specifically cricketing, facility. Established in 1882, it is the oldest cricketing ground on the island and is locally referred to as "The Mecca of Cricket". The Oval has hosted numerous important cricket games, locally, regionally and internationally. In 1895, it was the first ground in the region to host a touring English team. 1930 saw the first test match and since and the first test century by a West Indian, Clifford Roach.

In 2005, the grounds underwent massive expansions and after two years, Kensington Oval was reopened February 17th 2007. This was in preparation for the 2007 Cricket World Cup, in which Kensington Oval was to host the finals. Kensington Oval has truly been transformed from the meagre drounds which once held the space, to an elabourate eyecatching structure. The redevelopment saw Kensington Oval grow from 7 acres of land to 12.5acres. The 'new' Kensington Oval was designed by Dipesh Patel of Arup Associates of United Kingdom with the assistance of local consultants. This design awarded Arup Associates - Building Design 2007 Architect of the Year. A plaque is mounted at the main gate of the Oval to commemorate their accomplishments. 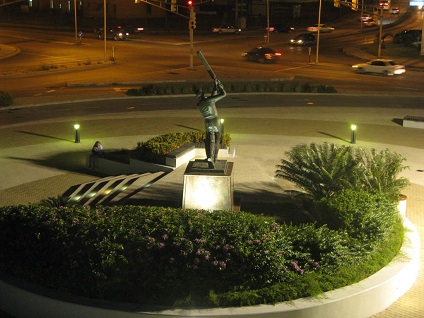 A statue of Sir Garfiend Sobers stands in front the Oval.. He is one of Barbados' national heroes, a cricketing legend and has been named one of five Wisden Cricketers of the Century. The stands in the grounds are named after Sir Garfield Sobers and other Barbadian cricketing greats: The 3 W's (Sir. Frank Worrell, Sir. Clyde Walcott and Sir. Everton Weekes), Wes Hall, Charlie Griffth, Desmond Haynes and Gordon Greenidge. In addition, the Oval has a Media Centre with six commentary booths and 85 press desk; a players pavilion with accommodation for 50 players, a 148 seat press conference room, 46 suites, 2 club terraces, 6 bars and 18 concessions.

The pitch has been well received by local, as well as international cricketers. Unlike flatter pitches of some Caribbean counterparts, Kensington Oval's pitch now offers a good bounce for bowlers while still allowing batsmen the opportunity to make some runs. Much has also been done to the outfield to prevent waterlog which was an issue of the past. With the vast increase in stands  including temporary stands, at a maximum the grounds held a whooping 27,000 spectators. The current capacity, however, is 11,000 spectators. This is great for the characters who we are accustomed to seeing at cricketing events like Mac Fingal, who along with his band marches through the stands, cheering and whipping the crowds into a frenzy.

Since its redevelopment, Kensington Oval is no longer limited to cricket. It has been the choice location for most major events in Barbados, including the venue for Rihanna's Diamonds World Tour, which has been postponed.