If you are a tourist to the shores of Barbados then you are probably hoping to catch a view of the beautiful and mischievous Green monkey (Chlorocebus Aethiops Sabaeus). Indigenous to West Africa (particularly Senegal and the Gambia) the Green Monkey travelled over rough seas, thousands of miles, on slave ships to the Isle of Barbados, more than 350 years ago in the 17th Century.

Today, Barbados is said to be home to roughly 14,000 of these animals, which can be spotted in every parish but are predominantly found, leaping amongst the trees and grooming themselves, in the quiet, wooded parishes of St. Peter, St. Thomas, St. Joseph, St. Andrew and St. John. 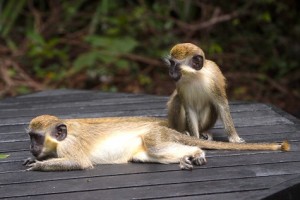 The Barbados Wildlife Reserve and the Welchman Hall Gully are two national wildlife Reserves where Green Monkeys and other animals find sanctuary. Visitors who arrive at feeding time are in for a treat as the animals are typically quite tame and so are comfortable with humans in close proximity. Outside of feeding hours, Welchman Hall, Grenade Hall and the Barbados Wild Life Reserve are still perfect locations to spot them playing in the trees in their natural environment or to spend an afternoon in beautiful natural environments.

Green monkeys are fascinating wild animals, a few are kept as pets or in cages for monetary gain. In the wild, when food is in short supply they are said to eat bird eggs, birds, mice, lizards and some insects. Generally their diet contains nuts, seedpods, grasses, bulbs and leaf sprouts, but their favorite foods include fruit such as dunks, mangoes, papaya and bananas. As a direct result of this, Green monkeys represent a potential army of natural pests to Barbadian Farmers.  In Fact, in the 1600’s upon their original arrival, monkeys quickly became an Agricultural pest, devouring or ruining many crops on the island, causing the Government to eventually place a bounty on their heads (or on their tails in this case). Today roughly one dozen hunters still participate in this program and the bounty is said to be $7.50 per tail. Alternately individuals can sell the live animals to the Barbados Primate Research Centre for $25 - $50 per monkey.

Scientists want their kidneys for the polio vaccine. But today, they're the bane of farmers whose crops they devour. 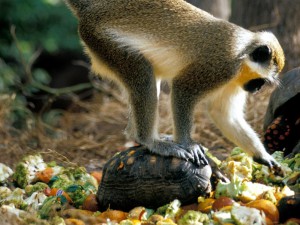 Green Monkeys are beautiful creatures and at birth (mostly during April and May) appear furless and seem to be a beautiful blue color. As the infant ages the blue is lost, the coat thickens and changes to a brownish-grey color, with olive green and yellow flecks. Additionally, the tail tip, back of the thighs, and cheek whiskers are often a golden yellow. This combination of colours causes the monkey to appear completely green in some lights and is the origin of their name…"Green Monkey".

Adult green monkeys grow to roughly two feet tall, live in troops of 15 -20 and have a life expectancy of 12 – 17 years, in the wild. Female, adult, Green monkeys generally weigh 9 pounds, stay with the same family / troop for their entire life and move up the “troop ranks” based on the size of their families.  Conversely, adult Males typically weigh up to 12 pounds, can change families/ troops frequently in their lifetime and gain their dominance or rank in the community by their size, strength and their ability to fight. Local Green Monkey also use various sounds and actions to communicate different messages. For example loud staccato barking and quick movements may mean that a predators such as a wild dog or mongoose is nearby.

One final interesting and unusual fact is that Green Monkeys are used to create the polio vaccine, and 70% of the monkeys utilized came from the Barbados Primate Research Centre. Today the center still sells roughly 800 monkeys each year to various companies and other research centers around the world.