This historic windmill is located in the lush, hilly terrains of the countryside in St. Andrew. Its location affords a spectacular view of Barbados' East Coast, and it is surrounded by land used for dairy farming. Built in 1727, it remains one of two intact, restored windmills in the Caribbean. The other windmill is at Betty's Hope Estate, Antigua. However, Morgan Lewis Windmill remains the only windmill in the world that is operational.

From as early as the 17th century, Barbados was the leading producer of cane sugar in the world. Now in the 21st century, Barbados' economy is still very sugar-dependent. Windmills were used to grind sugarcanes in the quantities needed to sustain export demand. Morgan Lewis Windmill ceased operations in 1947, making it the very last mill to operate in Barbados.

Its architecture is also of interest as it was constructed during a period where there was no cement as we know it to be. This structure was ingeniously constructed using a mixture of egg-whites and coral dust to seal together boulders. 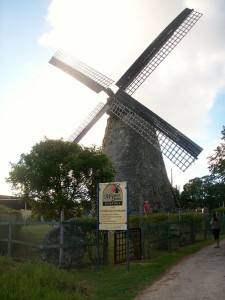 The Morgan Lewis Windmill underwent extensive restoration in 1999 to the tune of $80,000.00 by the Barbados National Trust. In September 2008, it was rendered inoperative by a lightning strike. Repairs to this Dutch-influenced mill began in 2010.

Although no longer used to grind sugar canes as before, during Barbados' Crop Season (February to June) its sails are put to use and it resumes operations one Sunday a month. Locals and visitors usually take a tour to the Windmill and partake in the freshly-squeezed cane juice produced by this historic windmill. Inside, you can observe the equipment used to produce sugar cane from the 17th and 18th century.

This windmill is also featured on one of Barbados' coins- the 25cent piece. Morgan Lewis Windmill is among the World Monuments Fund list of 100 Most Endangered Sites in the World.

Admission: Adults- $5 US  Children- Half Price 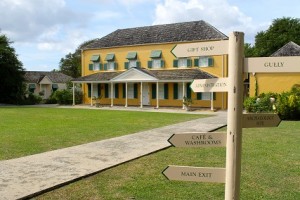 An interesting piece of Barbadian history is the George Washington House, located in Bush Hill, St. Michael. The property was restored in 2004 by Bush Hill Tourism Trust Inc and opened to the public in 2007. To Date it remains a place of great historical interest to locals and visitors alike.

The former plantation house, known at the time as 'Bush Hill House' was once the two-month residence of the United States' first President, George Washington, and his ailing half-brother, Lawrence Washington. George Washington was not President at this time in 1751, and Barbados is said to be the only country, outside of the USA, that he had ever visited.

Much to the delight of Barbadian historians, George Washington marked his two-month stay in Barbados with a few entries in his diary. From this diary we can even learn how much he paid a month to stay at the House:

"Nov 8th:Came Captn. Croften with his proposals [for the rental of his house] which tho Extravagantly dear my Brother was obliged to give. $15 Pr. Month in his charge exclusive of Liquors and washing which we find."

As it seems, the journey to Barbados was for the purpose of helping his older half-brother, Lawrence Washington, who was ailing with tuberculosis. Virginia doctors strongly recommended a tropical environment, and Barbados was just the island, as it had a reputation for healing lung issues such as tuberculosis. George Washington make mention in his diary of his brotherâs medical condition, and his quest for suitable lodgings in the island.

Lawrence Washington, however, did not recover as anticipated and grew worse while in Barbados. A move to Bermuda did not improve his medical condition, so he moved back to his home in Mount Vernon, Virginia where he died in the July of 1752.

His diaries also informed us of his contraction  and recovery from the smallpox disease while in Barbados. A fortuitous thing at the time as the resulting immunity from this disease allowed him to lead the American Revolutionary War while forces were being decimated by this terrible illness.

George Washington House is certainly an interesting piece of Barbadian and American heritage, and offers a glimpse into Barbados in the 18th century. Here you will see on display furniture, and even medical equipment that was used back in 1751 as well as several artifacts from the slave trade.

One of the four major towns in Barbados, Holetown is the area where the first English Settlers landed after, allegedly, being blown off-course while en-route to South America. They erected a fort which they called 'Plantation Fort', now the location of the Police station. It was originally called James town, named after King James I of England. However, it became more popularly known as Holetown. Some say this name was derived from the off loading and cleaning of ships in the very small channel located within the immediate vicinity of the town. It was also said that the river, at this site, reminded the sailors of âthe holeâ on the river Thames.

The Holetown Monument commemorates the landing, by Captain John Powell, in Barbados in 1625 when he claimed the island on behalf of King James I. The monument, which bears the shape of an obelisk,  was part of the 300th anniversary of the discovery of Barbados in 1905. It is interesting to note that the monument, erroneously, displays the year 1605 as the year of discovery; a plaque was placed at the base of the monument, in 1975,to record the correct date, 1625.

Barbados produces some of the highest quality cane sugar in the world, dating back to its colonial history. This Sugar Museum stands as a permanent record of the sugar industry in Barbados in the 1700s and 1800s. Named as a tribute to Sir Frank Hutson, who, with assistance from the Barbados National Trust, collected the artifacts in the museum, the Sir Frank Hutson Sugar Museum is the island's best site for understanding the sugar industry. It is also home to exhibits of old sugar-making machinery, transportation among others. This Museum will also illustrate the relationship with molasses and our world famous rum.

Named after Dr. Harry Bayley, a venerated medical doctor, the Harry Bayley Observatory remains the only observatory in the Caribbean. Dr. Bayley was the founder of the local astronomical society, the Barbados Astronomical Society in 1956. Built in 1963, the high-point of this observatory is its Celestron 14 inch Reflector telescope, which gives the viewer a crisp look into the cosmos.

Located in Clapham, St. Michael, the Observatory stands in the middle of a residential area, however surrounding light does not drastically hinder the star-gazing experience.

Unfortunately The Harry Bayley Observation was closed in January, 2011, until further notice.  Kindly call for more information on reopening dates.