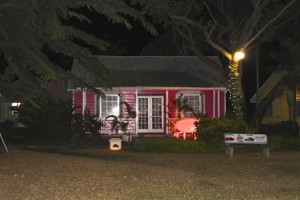 One of the four major towns of Barbados, Holetown was the area where the first English Settlers landed. It is said that they were blown off-course en-route to South America. They erected a fort which they called 'Plantation Fort', now the location of the Holetown Police station. It was originally called James town, named after King James I of England. However, it became more popularly known as Holetown. Some say this name was derived from the off loading and cleaning of ships in the very small channel located within the immediate vicinity of the town, while it was also said that the river at this site reminded the sailors of 'the hole' on the river Thames. This landing is commemorated every year at Holetown Festival.

The Holetown Monument commemorates the first English landing in Barbados, marked when Captain John Powell arrived here in 1625 and claimed the island on behalf of King James I. It is in the shape of an obelisk and it was part of the 300th anniversary celebration of the discovery of Barbados in 1905. It is interesting to note that this monument has the date of 1605 as the year of discovery, although a plaque was placed at the base of the monument in 1975 correcting this date to 1625. 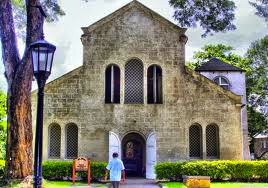 This Anglican Church is one of the four oldest surviving churches in Barbados. Built in 1628, the first settlers to Barbados built this church originally as a wooden structure. St. James Parish Church was later replaced with a coral and limestone structure after a 1675 hurricane.

One of this church's unique features is its original bell- the oldest in Barbados. No longer in operation after a fall in 1881, it was sent to England to be restored, and retained in the church as a monument. An interesting fact is that this bell predates the American Liberty Bell by 56 years. This bell is also inscribed with the words 'God bless King William- 1696'. Over the course of the years in the 1980s and 90s, there has been considerable work done in the restoration of the building.