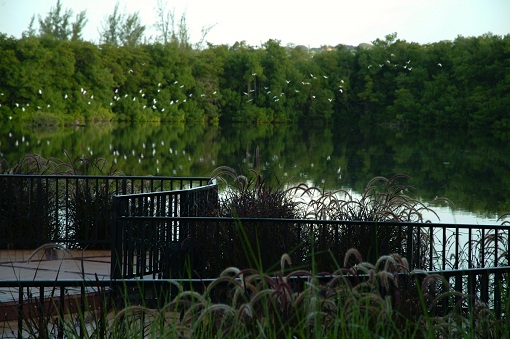 The Former Graeme Hall Nature Sanctuary and Swamp are located in a 1,156-acre drainage area in Greame Hall, Christ Church and is listed as one of the endangered Mangrove ecosystems of the Lesser Antilles. Over the past 200 years the location has been utilized for several activities including hunting (which was banned in 1981), fishing & agriculture, residential & commercial development, and even as a sewage overflow site.

Once directly connected to the sea it exchanged fish as well as fresh and saline water from the marsh to the ocean with the changing tide. Today this no longer happens; instead a manually-operated drainage gate located on Worthing Beach provides the only access to the sea. And the swamp is instead fed by fresh water springs, storm water runoff, and salt water ground intrusion.

Because it is the only coastal mangrove and sedge swamp in Barbados it also has served as one of only three primary roost areas for migratory and native waterbirds in Barbados, and it is also the temporary rest stop for migratory birds travelling the Eastern Caribbean Flyway between North and South America. Described as "one of the last significant wildlife habitats in Barbados".

The Sanctuary is said to be the oldest nesting colony for the Snowy Egret and the first known breeding colony of Little Egret to become established in the Americas.

Additionally the Green Monkey, Mongoose, Fisherman Bat & Bug Bat and a wide diversity of aquatic life such as Snooks, White Mullets and 3-4ft Tarpons swim near to shore. But over 20 species of fresh and brackish water fish reside in the swamp, including the unique killifish (Rivulusmarmoratus), which is the only vertebrate in the world to fertilize its own eggs.