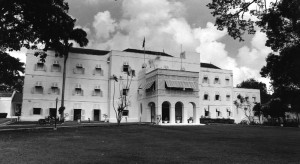 Built in 1702, Government House was originally a Quaker plantation. It was later leased and bought by the Imperial Government to become the residence of the Governor. Following Independence in 1966, this impressive structure continued its role as an official residence, now being the home and office of the Governor General of Barbados.

On the advice of the Prime Minister, the Head of State, Her Majesty Queen Elizabeth II, appoints the Governor General to act as the local representative. He/she then represents the Queen on ceremonial occasions such as the opening of Parliament, military parades, the presentation of honours, etc. The governor general holds a great deal of power since he is basically the Queen's voice in the country.

Several government functions and engagements are held annually at Government House. In 2012, as a part of the Diamond Jubilee of Queen Elizabeth II, Prince Edward, Earl of Wessex, and Countess Sophie, visited the island and Government House hosted a grand welcome.