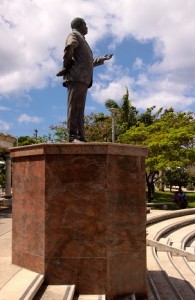 Barrow served in the Royal Air Force in World War II, becoming the personal navigation officer to the Commander-in-Chief of the British Army. He later pursued a career in law and joined the Barbados Labor Party in 1951. With differing views from his party and the assistance of Cameron Tudor and others, Barrow left the Barbados Labour Party and formed the Democratic Labor Party in 1955.

In 1961, Barrow was ellected to lead the country as the Premier and in 1966 led Barbados to Independence, at which point he became Barbados' first Prime Minister. Over a 15 year administration, Barrow was successful at making a number of social changes, including free education, improved health care, school meals services, a National Insurance and Social Security scheme, and more.

Barrow died in 1987, one year after he was again elected into office. He is remembered by a small park in his name, a public holiday on his birthday, he is one of the ten National heroes, his likeness is on the $50 note and a bronze statue of him overlooks Independence Square.