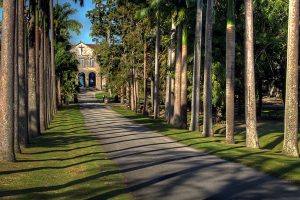 This Anglican Theological College has a few things to boast of. Not only is it located in the pristine countryside of St. John, on a hill overlooking the captivating Atlantic Ocean, surrounded by beautiful lush vegetation, jewelled with a breathtaking lily pond, but Codrington College also is the oldest Anglican theological college in the Western Hemisphere.

This college was built in 1743, founded by Christopher Codrington who bequeathed portions of his estates to establish a college in Barbados. It initially served as a college that provided preparatory education before the students went on to an English university. In 1830 the college became a university level institution but was almost completely destroyed in 1831 by a hurricane.