Island Heritage – Changing Of The Sentry

Island Heritage - Changing Of The Sentry 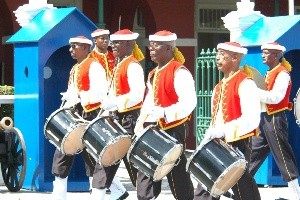 Every wednesday at the Garrison Clock Tower, sees the Changing of the Sentry from 11:45 until 12 noon. This ceremony, a reenactment launched in 2011 as a part of Tourism week, pays homage to Barbados' rich military heritage. It dates back to the 1700's and executed by the British troops, this ceremony was a main event at the Garrison. Today, this ceremonial mini-parade is executed by the Barbados Legion, made up of retired members of various military units, accompanied by the drum corps. The procession marches past the sentry post at the Clock Tower dressed in colourful colonial attire. 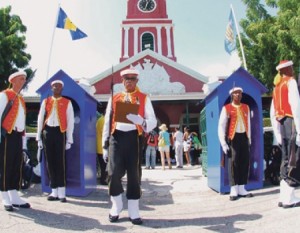 The attire, a Zouave uniform, is the ceremonial dress of the West Indies Regiment, dating back to the 1800s and is still worn today by the Barbados Defense Force Band. The West India Regiment was the first British Regiment of black soldiers.

This came about in 1793 when Britain declared war on the French. Slaves were recruited due to a shortage of troops. As incentive, each slave was given their freedom and paid as soldiers in the British army. Scores of persons head to the Garrison to watch the Changing of the Sentry. They head down early, enjoying the sweet rythms of steel pan music and enjoy the spectacle. Afterwards, many enjoy the 'Bajan' offerings which are available and take pictures with the various members of the Barbados Legion.