Held on the picturesque gardens of Holder’s House, this 20+ year old, annual arts festival is an outdoor theatre affair with performers from all over the world, including Barbados, Canada, USA, England and Europe. Traditionally held for two weeks in late March to early April, Holder’s Season showcases, plays, opera and even stand-up comedy.

Holders Season returns for 2016 on Friday 11th March – Saturday 19th March. The Little Theatre in the scenic gardens of Holders Plantation House is the venue for a programme, featuring a stellar international line up from Australia, USA, Cuba, and UK. I hope you’ll join us for a Season to remember.

A major star in the cabaret hot spot of the world, New York, Grammy nominated pianist Judy Carmichael is one of the world’s leading interpreters of stride piano and swing. Count Basie nicknamed her “Stride,“ acknowledging the command with which she plays this technically and physically demanding jazz piano style.

Referred to by the critics as “astounding, flawless and captivating” (The New York Times) and a wonderful raconteur, Judy has played in a variety of venues from Carnegie Hall, to the Peggy Guggenheim Museum in Venice, and worked with Joel Grey, Michael Feinstein, Steve Ross and the Smothers Brothers.  In addition, Ms. Carmichael has performed private recitals for everyone from Rod Stewart and Robert Redford to President Clinton and Gianni Agnelli.

Cited by Wynton Marsalis as the “future of the trumpet” and “one of the most sought after trumpeters in the world”, St. Louis native and Mannes School of Music graduate Keyon Harrold is a hugely sought after trumpeter, music producer, arranger and songwriter. He has featured on nearly 100 albums and toured, recorded and produced for some of the world’s best artists and ensembles including Jay-Z, Beyoncé, Common, Erykah Badu, Lauryn Hill, Mary J Blige, Rihanna, Gregory Porter, Andre Crouch, David Sanborn, Robert Glasper, 50 Cent, and LL Cool J, to name a few. He also has had numerous musical placements in film and TV including the upcoming Miles Davis Biopic “Miles Ahead” directed by Don Cheadle (film score by Robert Glasper) where he is featured as the trumpet sound of Don Cheadle playing Miles Davis. For Holders he recreates the musical gold that was Miles Davis.

Australian born Grammy and BRIT nominated classical saxophone player Amy Dickson made her concerto debut at 16. On her 18th birthday made her first recording as soloist with the Sydney Symphony Orchestra subsequently moving to London to study at the Royal College of Music, and then at the Conservatorium van Amsterdam. Amy has six albums on the SONY label to her name and a dazzling musical technique.

British pianist Simon Mulligan began playing at the age of 3 and quickly established himself in the music world as a multi-faceted virtuoso. Described by The Times of London as ‘the most abundantly gifted of pianists,’ Mulligan performs and records internationally as a soloist and chamber musician in many diverse genres. Simon Mulligan brings to the piano a wit and delicacy that many will remember from previous visits to Holders. A Classical night of the highest quality, from two exceptional international artists.

Jess Robinson Jess is an English actress, impressionist, singer and voice over artist, and has appeared on both stage and screen. Jess is currently voicing new comedy satire Newzoids, a topical puppet animation sketch show, as a part of a small team of top impressionists. Formerly the star of BBC 1’s Dead Ringers, and Little Voice, Jess is a performer with a tremendous voice, and an amazing skill for mimicry, as she impersonates everyone from classic Hollywood stars to pampered pop celebs in new newest show The Rise of the Mighty Voice.

In the second half of the show we welcome Steve Ross, the “Crown Prince of New York Cabaret” (New York Times). In the past decade, Steve Ross has performed around the country and around the world, in every kind of venue, from cabarets, to theatres, to Carnegie Hall, to the Cabaret Convention. For comedy night he performs some of the funniest comic songs ever written in his show To Wit – Funny Songs throughout the Ages.

From the Director of Lady Salsa and The Bar at Buena Vista.

Return to the golden age of Havana in the 1950s for a marvellous night of music, stories and dance in the company of one of the giants of literature of the twentieth century.

The stage is transformed to the elegant Floridita Bar, the favourite haunt of Ernest Hemingway, managed by Constante, the legendary barman, and Ernest’s dear friend, mixing the finest Mojitos and Cuba Libres on this enchanting musical island.

Meet Ernest Hemingway, performed by Canadian actor Brian Gordon Sinclair as he recounts incredible stories of his life and love for Cuba. With a Daiquiri in his hand, Ernest is excellent company, with his stories of lion taming, bull fighting, Marlin fishing, his writing, his loves, and the reasons for his tragic end. Musicians and dancers recreate the fabulous nightlife of Havana in the fifties, the era of the Rumba, the Mambo and the Cha Cha Cha.

Lauded for his distinctive timbre, magnetic stage presence and movie star good looks, Noah has become one of operas most sought after international performers. Noah Stewart’s musical development started in Harlem, where he studied classical music at The Harlem School of the Arts. He has been awarded numerous opera prizes in North American and Europe and most recently; he was awarded First Prize in The Mario Lanza Competition for Tenors. For the Holders Season Gala night, Noah treats us to his new programme, “So In Love”, an intoxicating mix of Broadway, classical, music from the movies and spirituals. 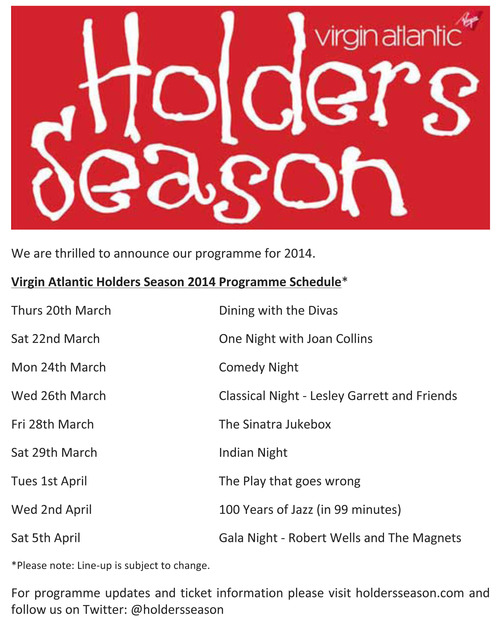 9th March 2013: Opening Night  Peter Grant, Rebecca Poole and Ronne Scott All Stars -  A tribute to the music of Hollywood in the 50’s and 60’s. Rosemary Phillips is the opening act.

14th March 2013: The Basil Fawlty Dining Experience. An Evening of Fantastic food and a hysterical recreation of one of the funniest sitcoms ever Fawlty Towers.

20th March 2013: Comedy Night  Paul Merton (The biggest name in improvisational comedy in the UK) and his Improv Chums.
23rd March 2013: Gala Night  Russell Watson and the return of String Fever. The Broadbent family the most versatile electronic string group ever and ‘The Voice’ the people’s tenor Russell Watson

“A unique experience at one of the world’s most attractive ’boutique’ festivals – eight exquisite and varied events in The Little Theatre, Holders. All of the variety associated with Wendy Kidd’s renowned Season of performance in the grounds of Holders House – jazz, blues and classical music, theatre and comedy to die for…

Once again there would be something for everybody at the Holders Season, all of which will resound throughout the unbelievably beautiful and atmospheric grounds of Holders House. If you haven’t been before, give it a go. You will not regret it!”

2011 String Fever & Blake: Truly astonishing, witty and imaginative music by the four Broadbent brothers, a beat box and their quartet of electronic stringed instruments followed by the fast rising and thrilling “Opera Band” that is Blake – “The Classical fab four”.

2011 Comedy Night – Ranier Hersch: A massive hit on his previous visit to Holders, the musician/comedian Hersch is a huge hit all around the world with shows that include All Classical Music Explained, Mozart Ze Komplete History and Ranier Hersch’s Victor Borge.

2011 An Audience with Jim Dale: Actor, Comedian, Oscar nominated film star and star of thirteen Carry On films tells the extraordinary story of life under the spotlight with the wit, energy and vigour of a man a quarter his age.

2011 ART: Yasmina Reza’s play that boasts non stop cross fire of crackling language, serious issues of life and art expressed in outbursts of sound like Don Rickles with a degree from the Sorbonne. Brilliantly translated by Christopher Hampton … ART takes that yawny old bore, the play of ideas and jolts it to life.

Craig Ogden and Escala: The two sides of classical music: Australian guitarist Craig Ogden, the pinnacle of virtuosity, coupled with the glamour of all girl quartet Escala.

2011 Comedy Night 2 – Ruby Wax: Losing it: A genuinely “laugh out loud” show by American comedienne and key figure behind the BBC television hits, Not the Nine O’ Clock News, French and Saunders and Ab-Fab. With musical accompaniment from singer / songwriter Judith Owen.

2011 Gala with Caroline O’ Connor and Three Mo’ Tenors: The whirlwind that is Australian film, West End and Broadway star Caroline O’ Connor. An unbelievably versatile artist, comedienne, dancer, singer and all round entertainer. Followed by the amazing Three Mo’ Tenors. Broadway was one of their last stops and they come to Holders with their mix of operatic arias, Blues, Gospel, soul and swing. Energy, chutzpa and charisma to die for. 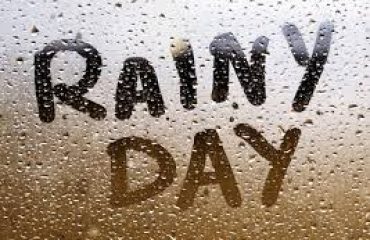 Top Things to Do on a Rainy Day in Barbados

8 Things to Do in the Month of May 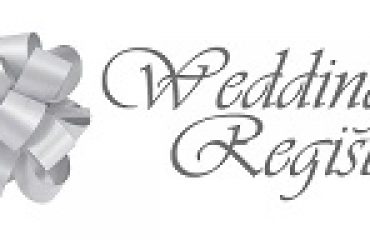