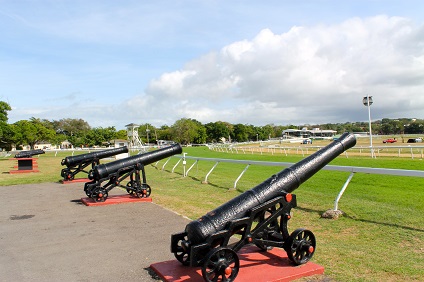 Did you know that Barbados has the rarest cannon collection? Yes. It is true. is home to the largest collection of English iron cannons from the 17th century. When the decision was made to create a National Ordnance Collection of all the old guns on the island, little did Major Michael Hartland expect to unearth over 400 of these artifacts. The cannons have been found all across the island from home gardens to embedded in the walls of buildings.

Why so many guns, you may ask. In th 17th & 18th centuries the British used Barbados to protect their interests throughout the southern Caribbean. One could argue that it is because of these 400+ cannons that Barbados was never invaded by another colonial power.

Charles Trollope, a world authority on ordnance, as invited to Barbados to catalogue the collection. Because of the meticulous records kept by the British, they were able to calculate the origins of the cannons found. They ranged from 1620 being the oldest to 1870, the youngest. The latter, called the Victoria Gun, was one of the rarest as it was the first of its kind to be made in England.

The rarest cannon in the collection, however, is the Commonwealth Cannon. After Oliver Cromwell’s death, King Charles II wanted to remove all traces of his rule, so he instructed that all cannons with Cromwell’s Coat of Arms be destroyed. This somehow survived. There is only one other known to be in existance and it is located in the Tower of London.

Twenty-six of the most important pieces in the collection are displayed in front of the Main Guard House.