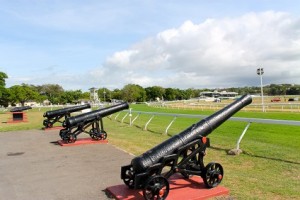 Bridgetown and its Garrison were specially selected by the United Nations Educational, Scientific and Cultural Organisation. The official inscription was granted by the World Heritage Committee during its 35th session at UNESCO Headquarters in Paris, France, which ran from June 19 through June 29 2011.

According to the World Heritage Centre, Bridgetown is "an outstanding example of British colonial architecture consisting of a well-preserved old town built in the 17th, 18th and 19th centuries, which testifies to the spread of Great Britain's Atlantic colonial empire. The property also includes a nearby military garrison which consists of numerous historic buildings. With its serpentine urban lay-out, the property testifies to a different approach to colonial town-planning compared to the Spanish and Dutch colonial cities of the region which were built along a grid plan.

Barbados submitted an application dossier February 1, 2009 that detailed four sites on the island to be considered as a World Heritage site. In addition to Bridgetown and its Garrison, it also included the Scotland District and the Newton slave burial ground.

Other UNESCO World Heritage Sites include the Great Wall of China, the Statue of Liberty in the U.S.A, and the Pyramids in Egypt.